This week on one of my nightly walks, my walking buddy told me of a new recipe that she tried.  While writing this post I realized that we often talk about food on our fast pace walk, which I think is interesting...but, I have also been known to make cookies while watching Biggest Loser.   Anyway, I thought I would share this fun fall breakfast treat...or at our house it could be dinner.   I tried out the recipe today and they are yummy! 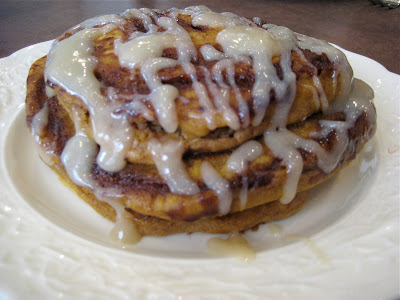 The trick to these is the cinnamon filling that is drizzled on while cooking.  More details below. 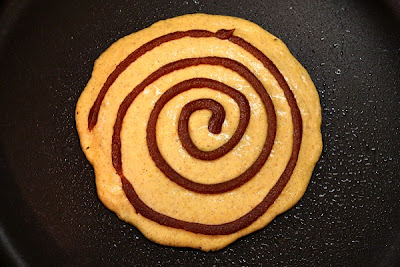 My tips:
1.  Don't try to hurry the cooking time, they need to cook thoroughly.
2.  I like the icing a little thinner than the recipe called for, so it is more of a glaze.

1. Prepare the cinnamon filling: In a small, microwave-safe bowl- heat butter, brown sugar and cinnamon for 40 to 60 seconds, just until butter is melted. Whisk the filling ingredients together and then pour it into a sandwich-sized zip baggie. Zip up the baggie and lay it on the counter while you prepare the pancake batter.
2. Prepare the Icing: In a medium microwave-safe bowl, heat butter and cream cheese 30 to 60 seconds, just until butter has melted and cream cheese has softened. Whisk in powdered sugar and vanilla and combine until smooth. Set the icing aside.
3. Prepare the pancake batter: In a large bowl, whisk together milk, pumpkin, eggs, oil, and vinegar. In a separate bowl, whisk together flour, baking powder, baking soda, pumpkin pie spice, salt and brown sugar. Add the dry ingredients to the pumpkin mixture and stir just until all is moistened.
4. Check on your cinnamon filling: Open up the baggie again and give it a good stir to re-incorporate any butter that may have separated. You want the mixture to thicken a bit- it's best when it's similar to the squeezing texture of toothpaste (which will eventually happen if you leave it on the counter long enough, but refrigerate for a few minutes if you need to). Don't try to use the filling for the pancake swirl unless it has thickened as it will be too runny! Snip off a small piece of the corner of the baggie.
5. Cook the pancakes: Preheat a large skillet or griddle to medium. Use an ice cream scoop (or ladle) to add the batter to the pan. Use the bottom of the scoop or ladle to spread out the batter into a nice, even circle. Reduce the heat to medium-low. Pick up your cinnamon filling baggie and squeeze the filling into the corner. Starting at the center of the pancake squeeze the cinnamon filling on top of the pancake batter in a swirl (just as you see in a cinnamon roll). Cook the pancakes 3 to 4 minutes, or until bubbles begin popping on top of the pancake and it is golden brown on the bottom. Slide a thin spatula underneath the pancake and gently but quickly flip it over. Cook an additional 2 to 3 minutes, until the other side is golden as well. When you flip the pancake onto a plate, you will see that the cinnamon filling has created a crater-swirl of cinnamon. Wipe out the pan with a paper towel, and repeat with the remaining pancake batter and cinnamon filling. Serve pancakes topped with a drizzle of cream cheese icing.