My good friend Sande Krieger recently took a trip to Morocco of all places.  Before she left, I asked her if she would share some photos and experiences when she returned.
First, I thought I would share a map of Morocco, since even people who are good at geography might like a little visual.  From Sande's blog, I know Sande, her husband and 2 sons flew to Malaga, Spain and took a ferry across to Tangier. 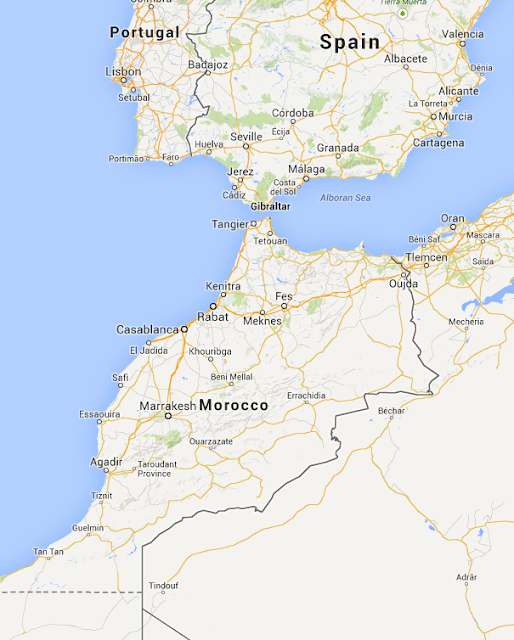 Sande's words:  Our first stop was Chefchaouen, a city in the Rif mountains, just inland from Tangiers.  It did not disappoint.
Our hotel, Dare Chchaouen had a fabulous pool that over looked the city. 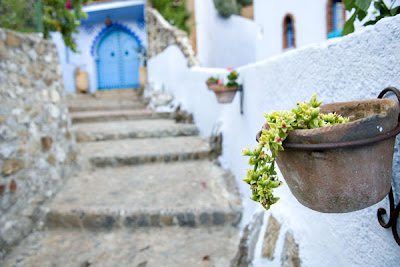 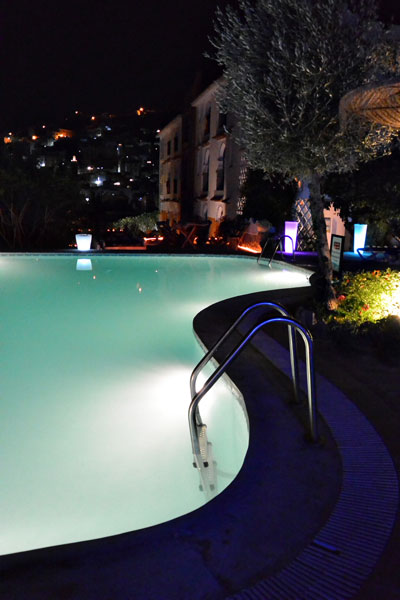 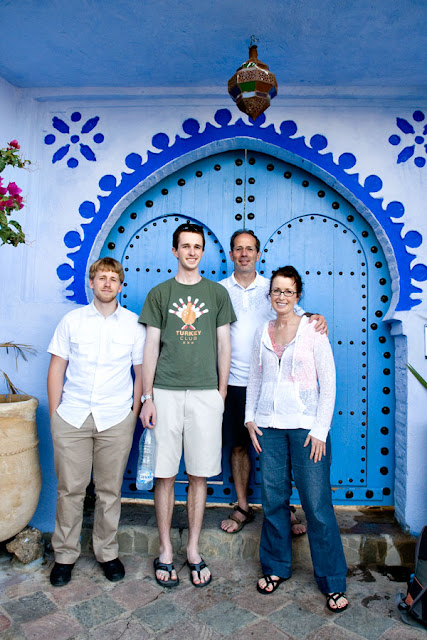 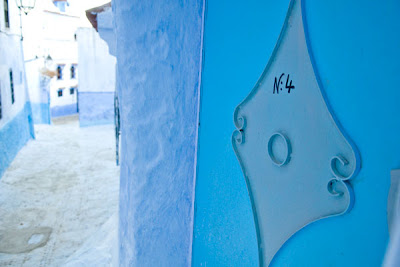 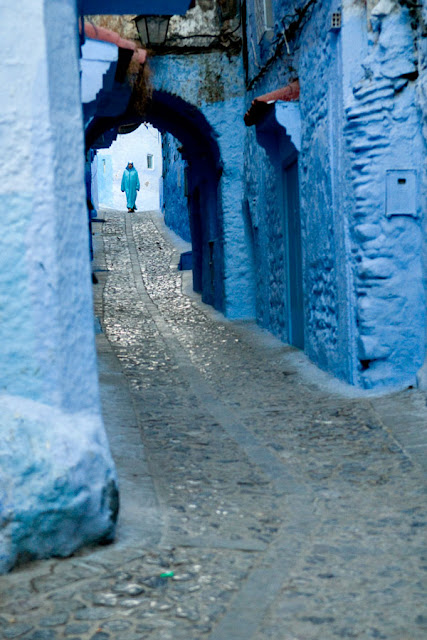 The story in the guide books says that they painted most of the city blue and white to combat the flies. Our guide, Youssef, laughed out loud when I read that to him. He said they painted it blue and white because the tourists like it.
I got up super early and walked through the dark streets alone. The only other person I saw the first 30 minutes was the garbage collector. Then the locals started coming out. 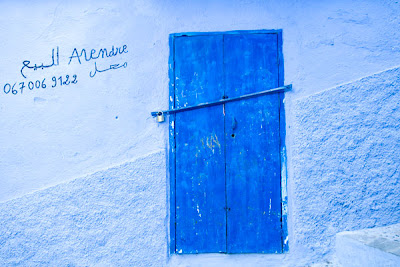 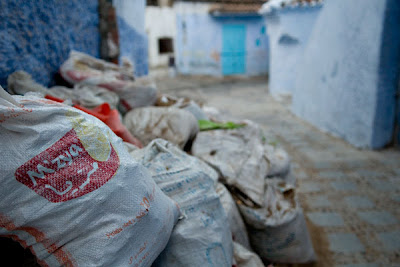 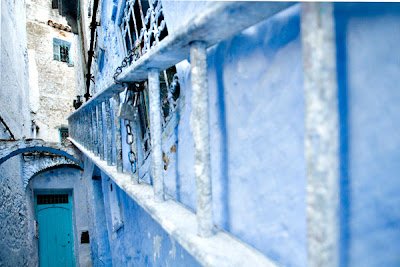 Most Moroccans don't like to be photographed but I found some teenagers that cheerfully posed for me. 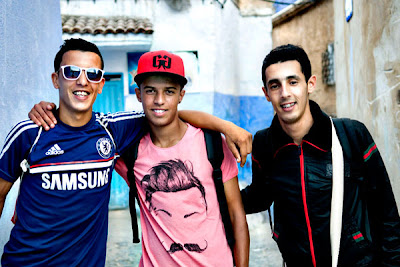 We didn't see many dogs around Morocco but cats and donkeys abound. 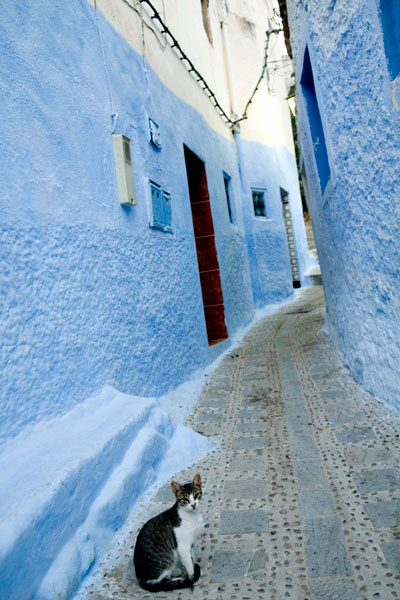 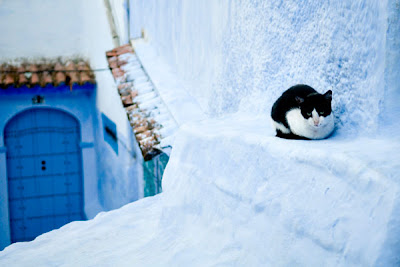 Fes has the oldest looking medina. Parts of it look truly medieval with it's narrow walkways that have old slats covering it to keep out the intense sun. My favorite vista was over the dye pots of the leather district. You are given a rather large sprig of mint to combat the smell of the ammonia (they use pigeon droppings to create a dye to color the leather).  I was so enamored with the view that I didn't even notice the smell. 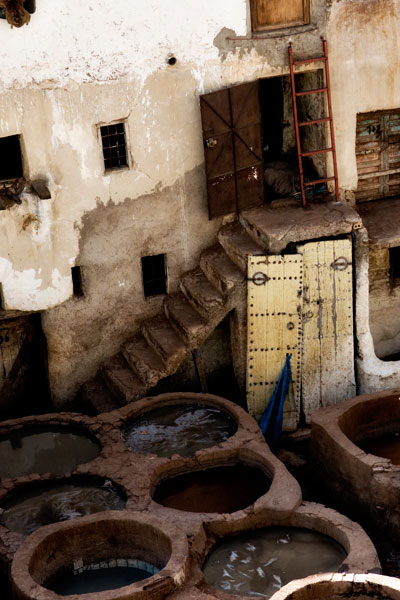 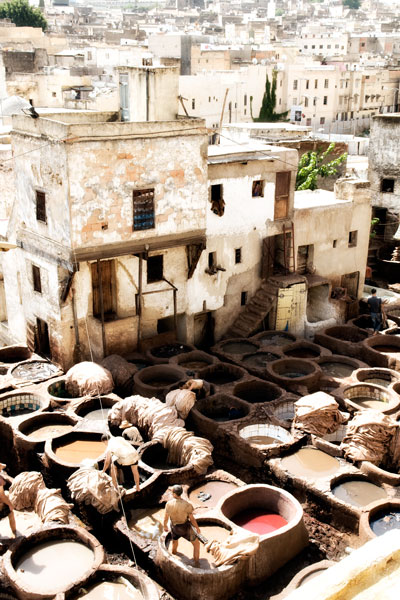 Our camel trek into the Sahara started at sunset and continued by full moon. 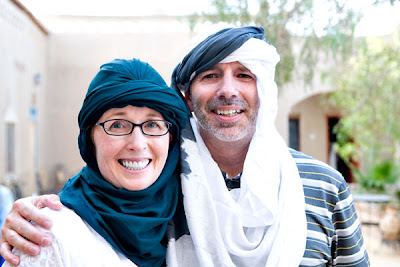 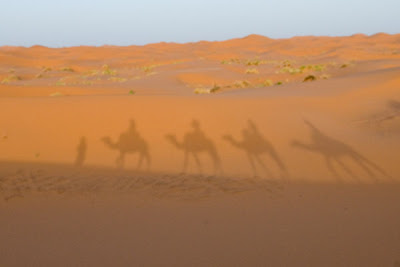 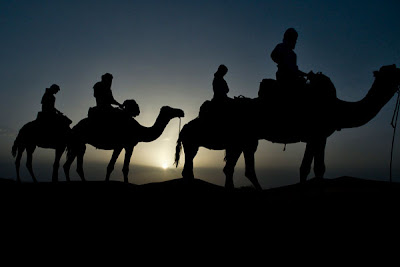 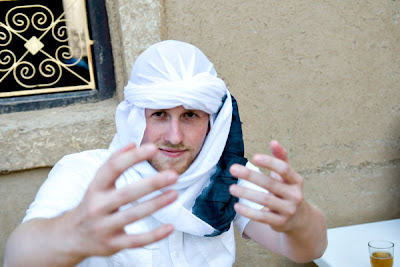 When our Berber camp came into view our inner thighs shouted for joy!  Let's just say that the Berber people are far more flexible than the Kriegers. We jammed on drums in the moonlight and listened to the wind create drifts of sand against our tent during the night. 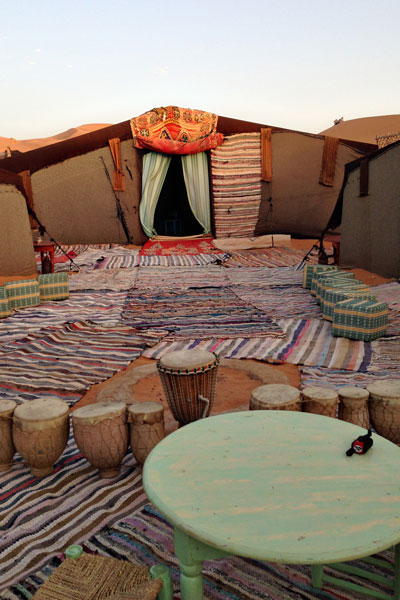 We visited an open dungeon in Meknes where the prisoners did not have individual cells but were housed in large rooms like this one. 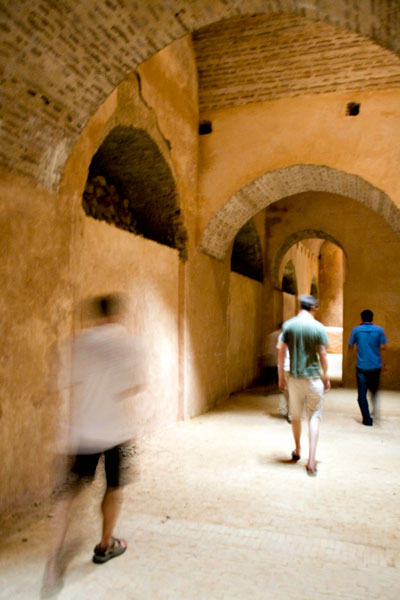 WE drove through the valley of 1000 kasbahs and visited some of the large ruins. 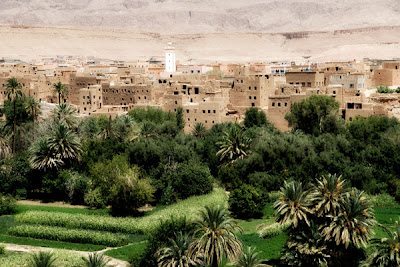 And in Marrakech we got up close and personal (not very close because I HATE snakes so Mike had to snap this shot) with a cobra. 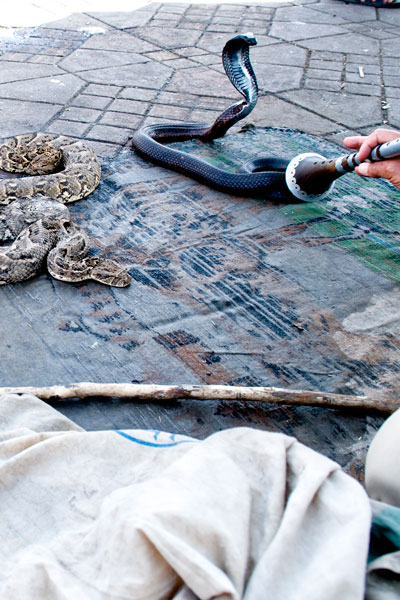 We met some interesting characters, like this fellow who chased me down the alley because I took his photo without paying and demanded that I pay him.  It was a costly photo and not worth the money. 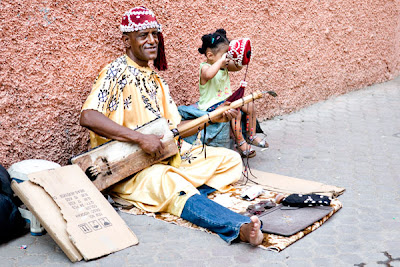 This fellow saw us standing next to the road drinking sodas and he stopped and hopped off and came over and asked in Berber if he could have our half consumed sodas.  He had a mischievous grin and was very insistent so we exchanged them for a picture. 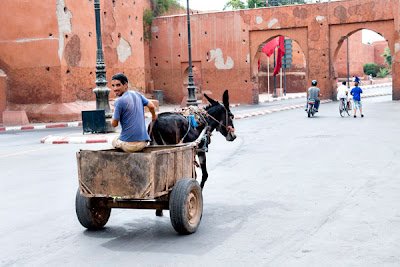 These carts and donkeys are used to haul everything through the medina in Marrakech and throughout Morocco. 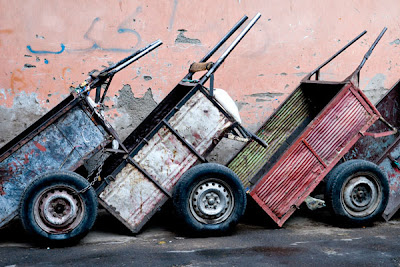 Our last stop was the 3rd largest mosque in the world, Hassan II in Casablanca. It is the only mosque in Morocco that allows non-muslims inside. It took 10,000 craftsman and 6 years to complete and was absolutely a work of art. 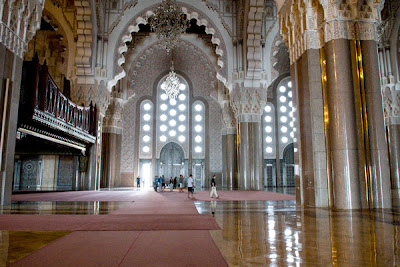 Thanks to Sande for sharing her experience in Morocco.  It really looks like a magical place, doesn't it?  I mean really, how many people can say they have ridden through the Sahara on a camel and slept in a tent?  I guess I will have to live vicariously though her!  Sande has just started blogging about the trip here.  She gives more information about how they got there, guide company, and food they ate.  So if you are the least big interested in Morocco, check it out.  Maybe it will spur your interest in visiting someday.