With only a few short hours are left until I leave for CHA (craft and hobby trade show) I thought I'd better fill you in on what has been going on around here.  The month of December was a whirlwind of activity with it speeding into full hyper drive the closer we got to Christmas.  So many things going on behind the scenes that no one ever knows about to get ready for the show (and that is the way it should be).
Even though I cannot tell anyone what I am doing to prepare, it does not diminish the excitement of the work.  My work table has been in constant use moving from one project to another and lest you think I am the only one, I am not.  Many other artists have helped out with the sample making for this show.   Part of my job is working with those artists which has made the chaos of December quite nice for me.  It always amazes me that 5 people can be given the same product and do such wonderfully different things with it.  One is not necessarily better than another, just different and in their own personal style.  That is what art is all about right?  Creating what you see in your minds eye to be beautiful and pleasing.  If someone else appreciates it...great, but if not, that's okay too, because you love it and believe in it.
Okay, let me step off my soapbox and get on with the post...more sneak peaks from Sizzix Alterations and Ranger.

If you haven't heard...there is new Distress Paint in 24 colors. You can see, read about and watch a short video here. 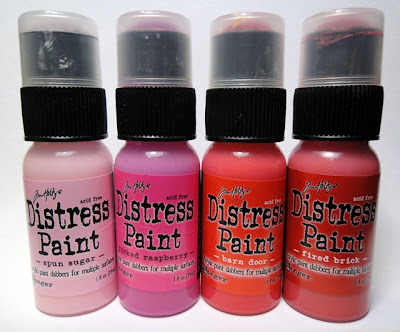 Stampers Anonymous sneak peaks started today on Tim's blog. I do not know how you will go about choosing which sets to buy...seriously.  I can't tell you how long I have waited for a great alpha set like the one below...I don't own it yet, but I will. 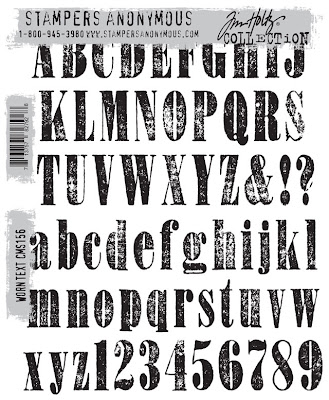 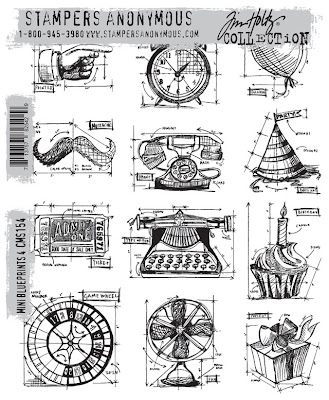 Here is a sneak peak of a little project I worked on with new Blueprint stamps. 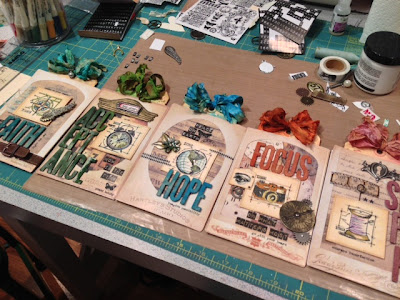 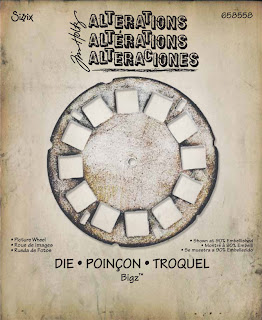 Getting excited?
Me too, and I have already worked with much of the product!  It is a great release.  So much to look forward to in the coming months.
Here are few more sneak peaks of the projects I created.  I will start posting them when I return from the show next week along with scenes from our adventure to CHA. 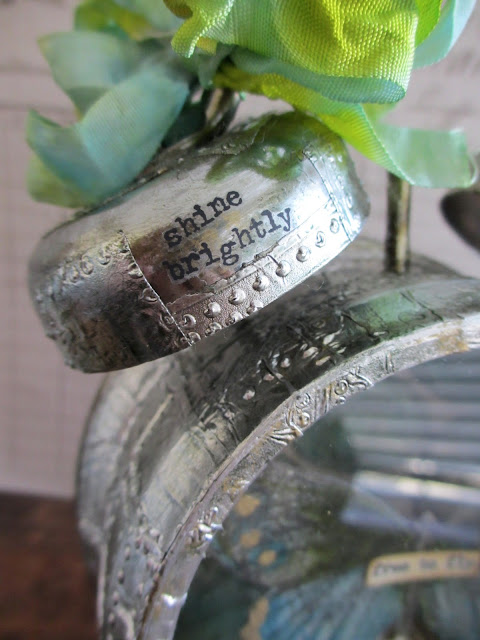 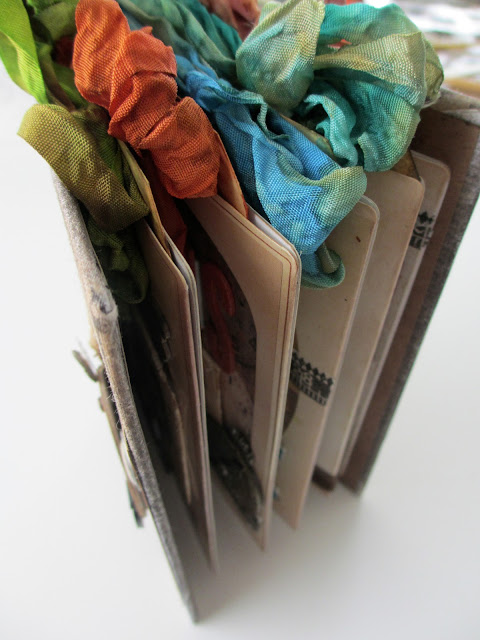 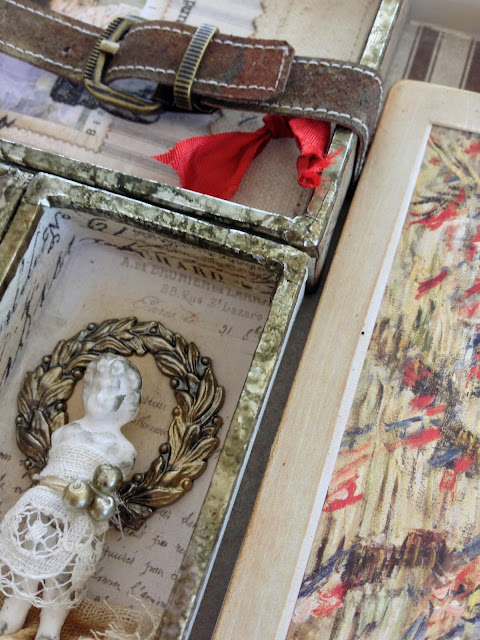 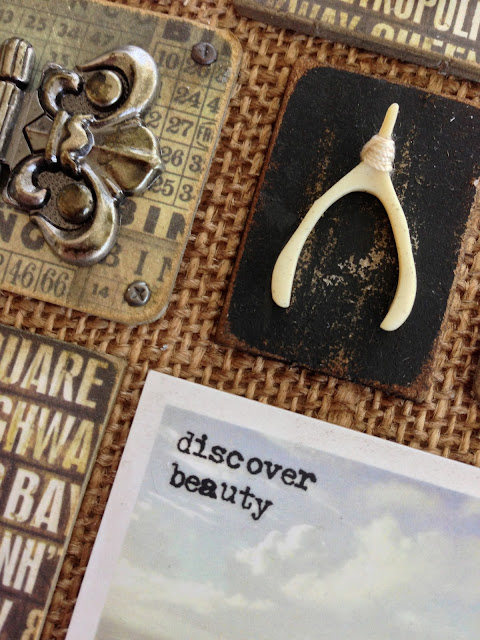 And just for a little fun today...remember when I went to Wendy Addison's studio last month?  Well, to get to her studio in Port Costa you have to travel on a two lane road through a very rural area.  As my friend and I were driving we came across huge mess on the side of the road where it was very obvious that someone had dumped all the trash from their vehicle and drove off, leaving the State of California to pay for the disposal of their waste.  As we rounded the corner and saw the debris I yelled out to my friend who was driving, "Stop the car!  I need something from that dump" (I know you long time readers are probably having a flashback to the time I stopped for dresser drawers on the side of my street).  Anyway, she backed up and I got out of the car and jumped into the debris pile to grab my prize even though it was soaking wet from the light rain that was coming down.

We decided with our two suitcases and Christmas shopping packages in the trunk that we were going to have to put the back seat down.  Sounds simple, right?  Well, she has only owned the car for a short time and had never had cause to put the seat down before, so she had to get the owner's manual out to figure out how to do it.  Should I mention now that it is no longer just sprinkling rain but really starting to rain?  Oh, and then a cyclist rides up and sees these two women on the side of a rural road, one of them standing in a pile of garbage....(what a site that must have been).  Of course I HAD to yell out to him, "I swear we didn't dump it! we're just taking some stuff!"   The funny thing was, he stopped his bike, turned around, an rode back down the hill...probably to find someone in auorthority to arrest us.

Well, we finally figured out that we had to pull the bright red button in the trunk to make the seat go down and we shoved in my prize...what was it you say?  well, for those of you coming to CHA come by the Idea-ology booth and you might just spot it.  For the rest of you I will take a photo at the show and post it here after the show opens on the 12th. 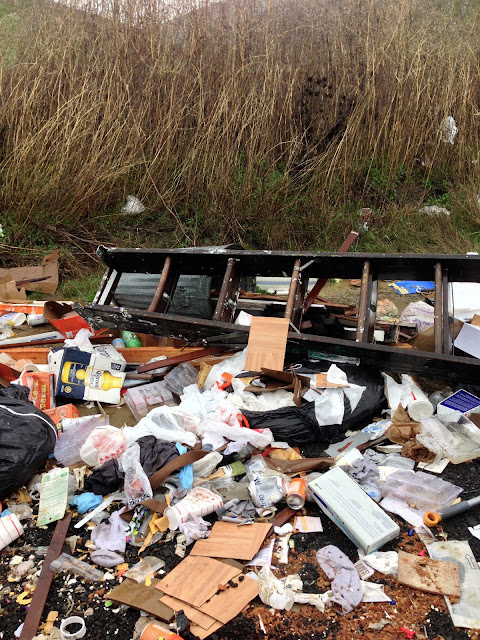 I leave in the morning to start set up...hoping to document the booth, from crates to inspirational magic.  Wish me luck.

and maybe I should pack something...

cheers for a great week!
paula
Posted by Paula Cheney at 10:32 PM