Earlier this summer my husband dismantled a headboard we built about 8 years ago.  I was tired of it and had moved it from our bedroom to the garage earlier in the year.  He decided to recycle the plywood to build a podium for his classroom so he could have a place to lay out notes and books used during a classroom lecture.  Fast forward to Aug and the podium still needed to be finished to be ready for the new school year.
First we thought of maps to cover the entire thing.  So, last week we drove up to an antique store in Arroyo Grande to look for some old maps.  We didn't find many but we did find this big book for $22 (it was about 4" thick when we started).
Perfect for a someone who teaches American History. 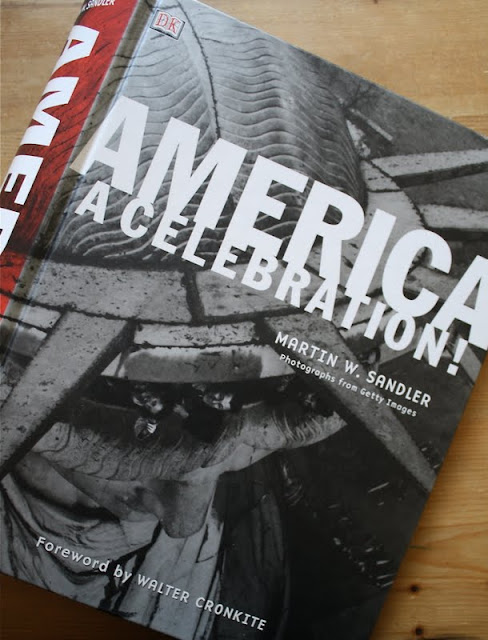 We dismantled the book's signatures in order by clipping the threads (that took some time!).  Some pages were glued to the binding so we left those intact and went back to hand cut them from the binding.  From there, he decided which pictures to use on this project and which significant photos to keep for a giant history timeline that will span a big wall in his classroom, like this picture of Martin Luther King below. 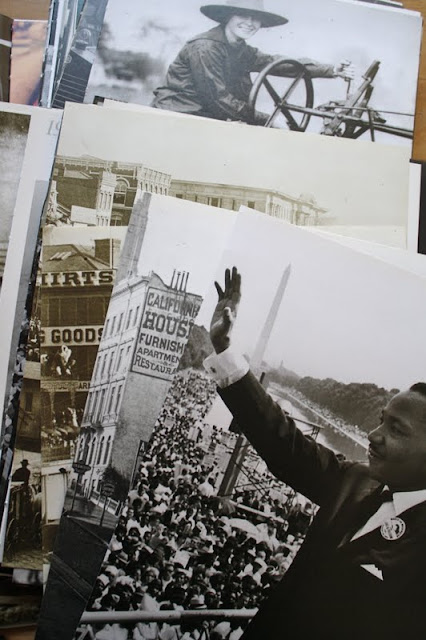 He then cut the photos with my trusty roller cutter and ruler. 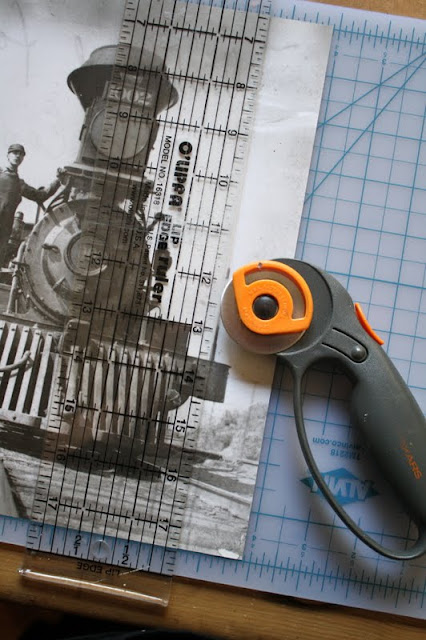 I gathered the cut photos and layered them on the primed wood with Mod Podge.  Don't you love that picture of the young John Travolta in Saturday Night Fever? and right next to Richard Nixon! 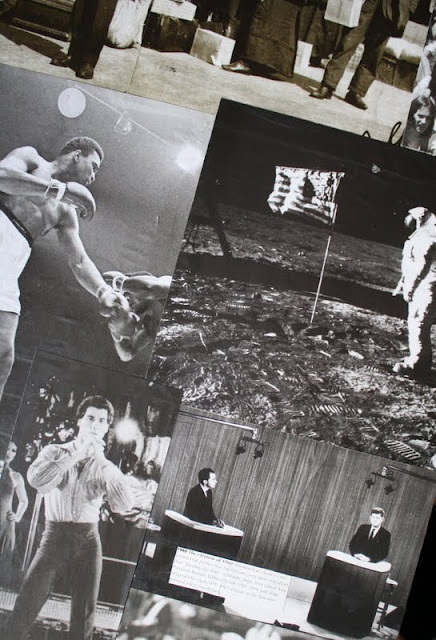 Once the images were good and dry (about an hour), I took a scrap piece of sandpaper and sanded the edges of each picture to make it look rough and worn. 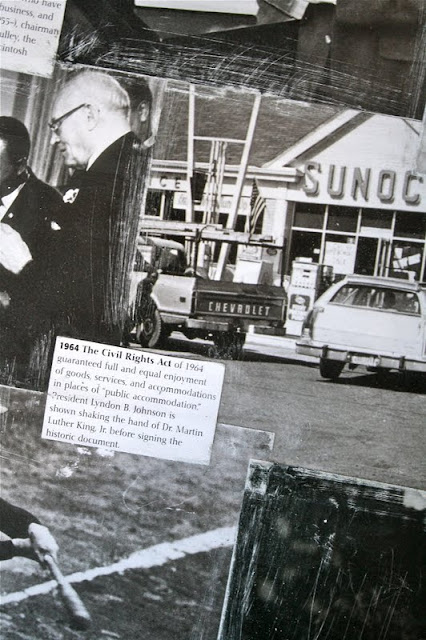 Once I was finished sanding one side of the podium I dusted away the paper pulp with a small hand broom then inked the pictures with Distress ink.  Note: I used Vintage Photo but it was my old pad which is very used and mellowed in color.  Using the ink helped "marry" the images together giving them a universal color instead of some black and white and some sepia tone. 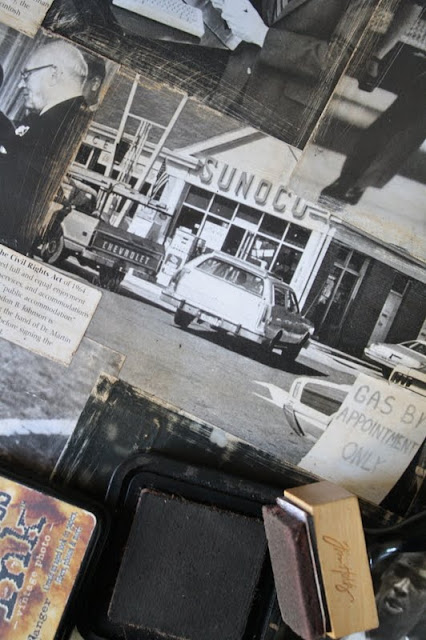 In this picture I used the Distress ink all around, but not on, the "war is over" balloon for emphasis. 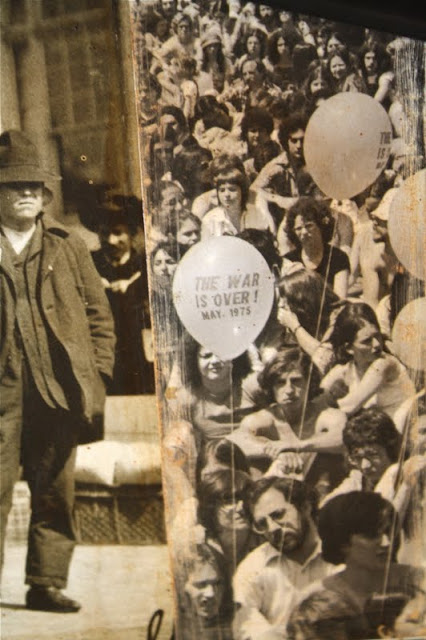 There were a few double page spreads that he wanted to use such as the image of immigrants at Ellis Island.  At first I put them together like you would wall paper so the seam would not show, but then in the sanding portion decided it looked better if the center seam was sanded almost like two pictures had been layered one over the top of each other. 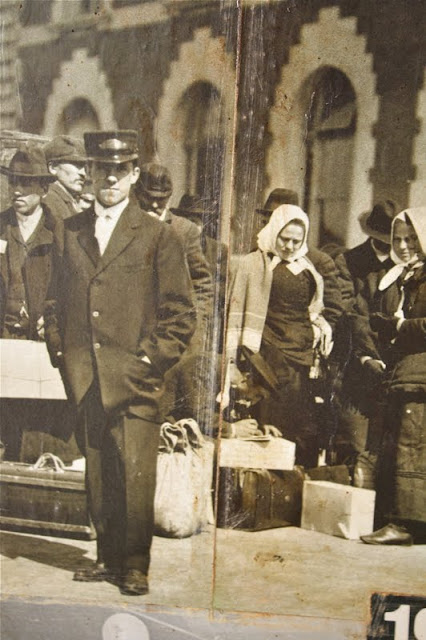 I always think numbers add to the overall piece so I dug out some old vinyl numbers and stickers in varying sizes to add to some of the pictures that has specific dates associated with an event. 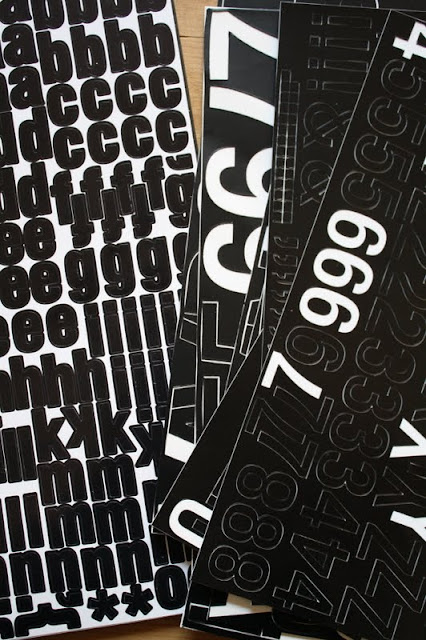 Like this
I used white numbers on the photos that had a dark background (with just a bit of ink). 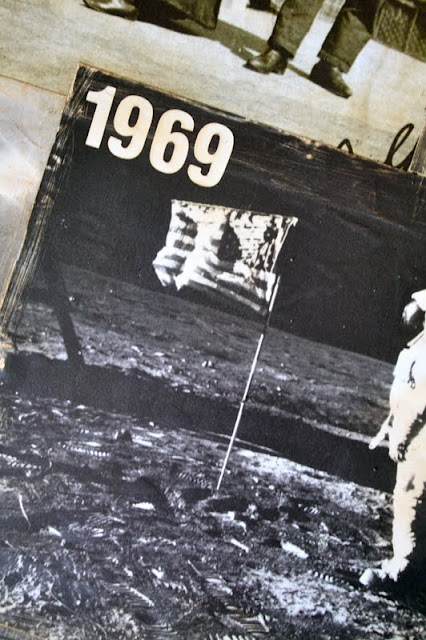 My husband loved the double page spread of Jessie Owens winning one of his four gold medals at the 1936 Olympics in Berlin.  We decided it would look great, front and center. 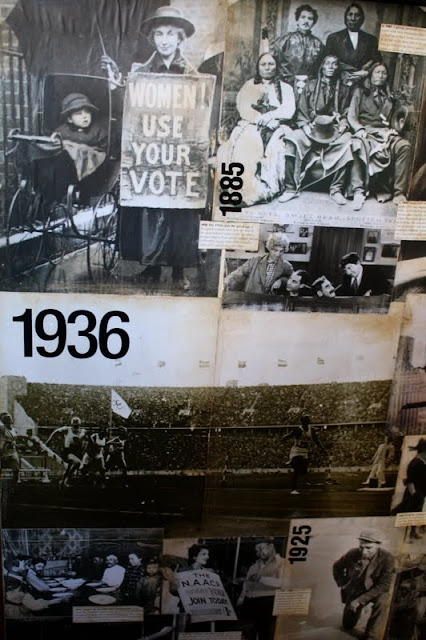 The last step was to spray a Matte finish Varnish over the photos for protection.  If one of the pictures becomes damaged (remember, he's using this in a high school classroom) he can always paste another picture over the top. (yes, I know he was wearing a dress shirt while spray painting...don't think I didn't say something) 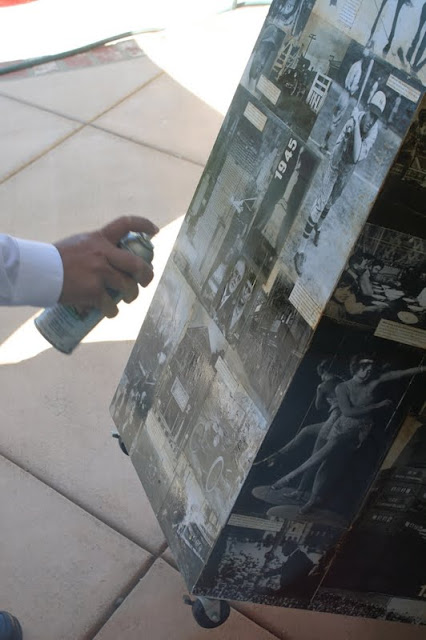 Here are some tips for doing a project of this size:

1.  Cut more images than you will need
2.  Cut a variety of sizes and shapes
3.  Fill in odd shaped places first (like under the slant at the top of the podium), then layer over the top.
4.  Use your hand, a bone folder, or brayer to smooth out the images.  No matter what you do, there will be bubbles and that's okay.  After about 24 hours of drying the bubbles will disappear and then you'll say, "why was I so worried?"
5.  Have a package of baby wipes nearby.  Mod Podge is messy and you will need to keep the brayer clean.


Here it is waiting to go to his classroom.
(I secretly hope the other history teachers are jealous) 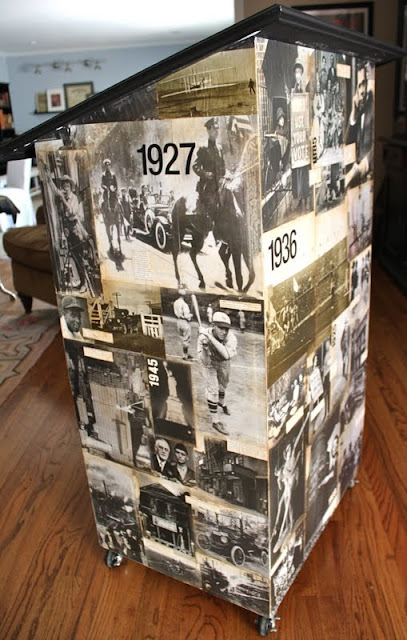 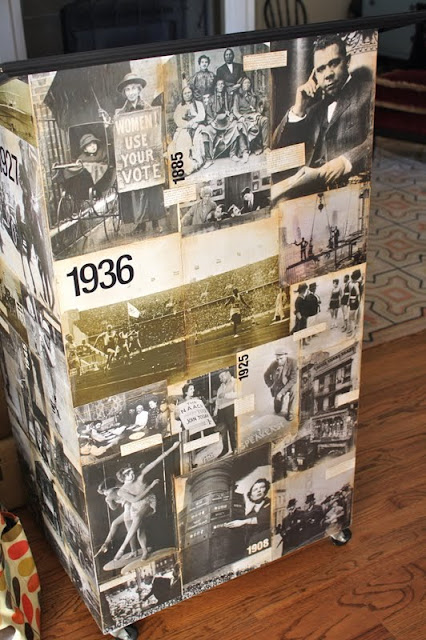 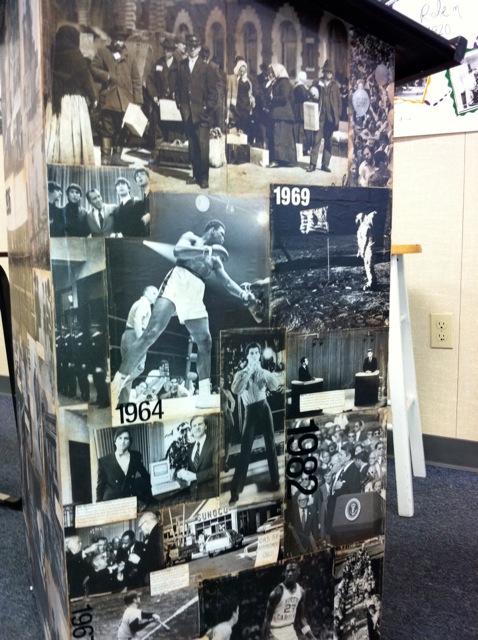 I realize that no one else needs a History podium but I think the same techniques could be used on other pieces of old furniture.  Find a book of pictures you like...fashion, flowers, atlas, etc.  How about adding the images to a table top or desk top?  (love to see a "fashion through the years" desk top).  When I was in elementary school I went to a friends house for a sleepover.  I don't remember the girl's name or even what she looked like.  What I do remember is that her mom had taken pages from fashion magazines (can you remember how big the pages of Seventeen magazine were back then?) and layered them on one feature wall in her bedroom.  No ads, just the pages that had images of faces.  I was truly mesmerized.  Of course I asked my mother if I could do the same to my own room but then realized actually how many pictures you would need to create a wall such as hers.  I guess I tell you story to say, start small, it's more work than you think.

I still love that wall.
cheers,
paula
Posted by Paula Cheney at 1:25 AM