One of a Kind

Hi everyone, hope you had a great weekend.   We took the 45 minute drive up to Morro Bay as the weather in California was spectacular on Saturday.  If you have ever been to Morro Bay, chances are you were wearing a jacket and tennis shoes and stopping for hot chocolate since it can be very cool and foggy.
Not this weekend.
78 degrees and no fog in sight...in fact flip flops were the shoes of choice for the day!  Nice to have a relaxing morning to walk on the harbor and watch the boats go by. 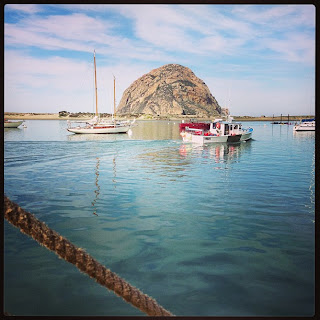 Well on to todays tutorial...it's a simple sewing tutorial that I thought the Sewing Blueprint stamps would work great on.   Since I am on a Distress Paint kick, you know they are going to make an appearance. 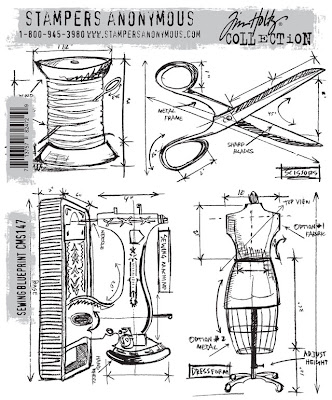 I used the dabber top on the Distress Paint bottle to color the stamp.  Then stamped a couple images on muslin fabric so I would have more than one choice.  I am always surprised at how clear the paint will stamp on fabric with no bleed...really amazing.
I choose Barn Door which can be kind of deceiving.  At first it looks pinkish but as soon as it dries, it changes to a nice red color.  Don't let it fool you into thinking it's pink, because it's not. 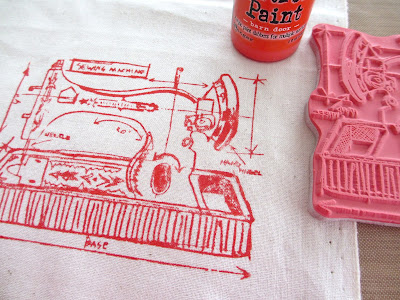 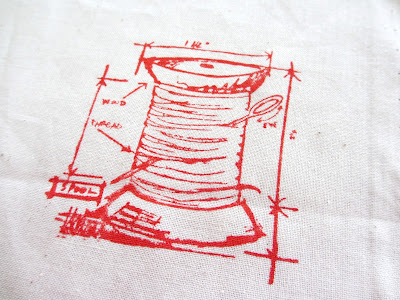 I decided to make a cover for my sewing machine.  I started by cutting a piece of striped fabric 26 x 24".  I folded the fabric in half so that I had a piece 13 x 24", then sewed up the two sides. 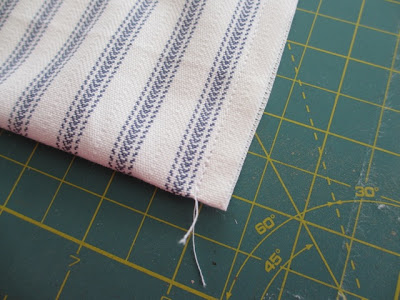 Leaving it inside out, I tried it on the sewing machine to make sure it fit.
To make the box corner just leave it on the machine and pull the corner up (like it has ears). 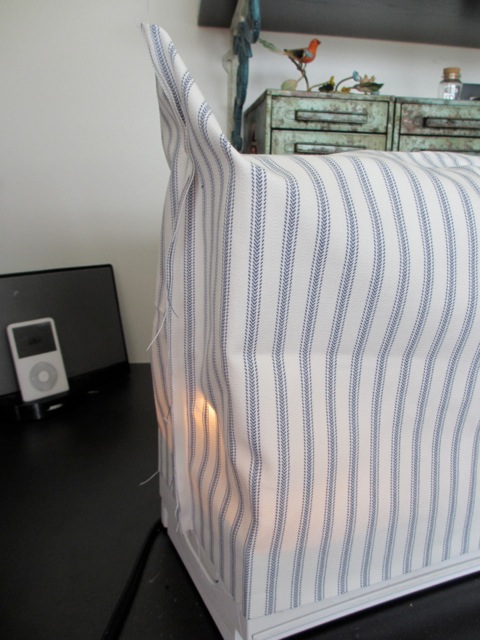 Pin the corner where you will stitch. 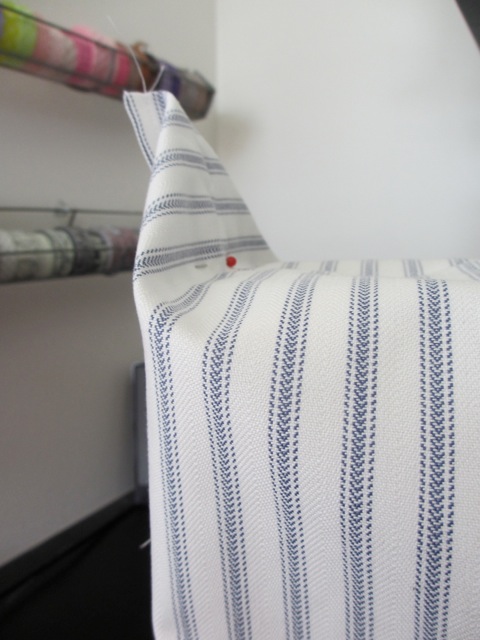 Take it off the sewing machine and stitch across the triangle.  Don't sew over the pin, just pull it out before you get to it.  I like making a boxed corner with striped fabric since it gives you a stitching line. 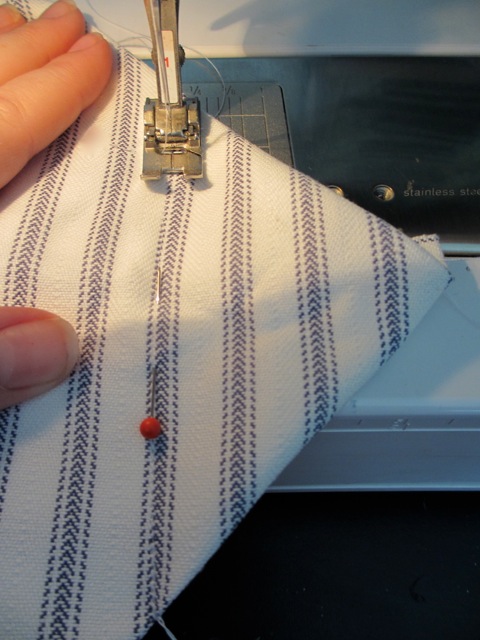 Cut the triangle off about 5/8" above the stitching line. 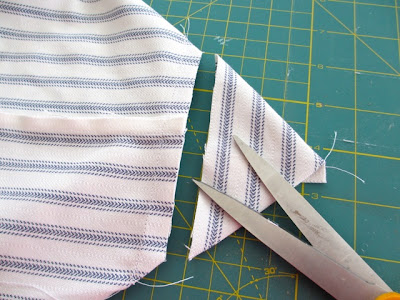 Turn right side out and put cover back on the machine to check for fit.  Done. 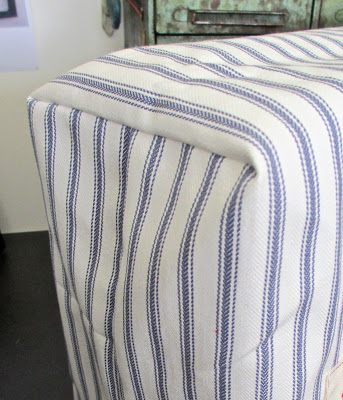 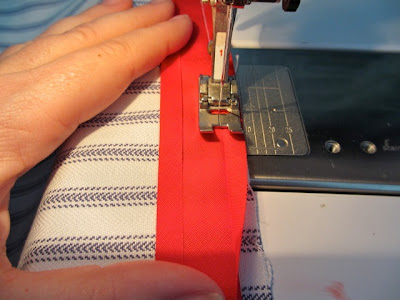 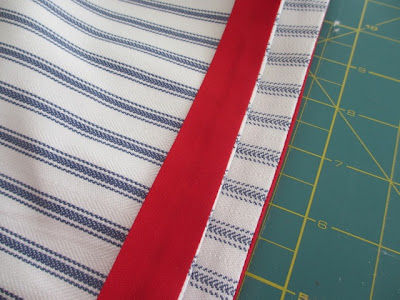 ,
Once pressed flat, stitch in place. 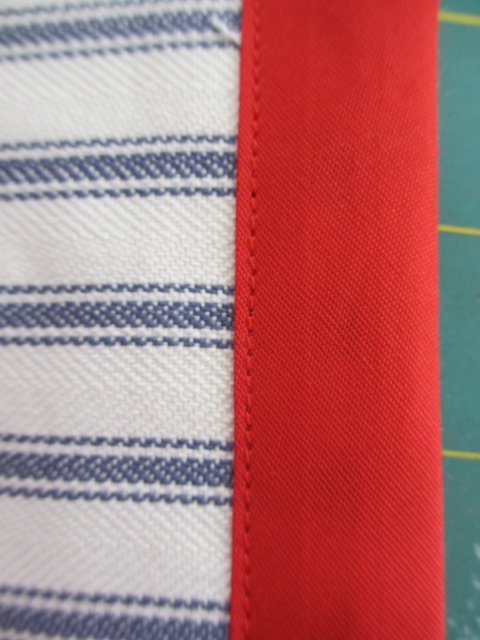 Now to add the stamped image.  I cut it out and pinned to the front of the cover. 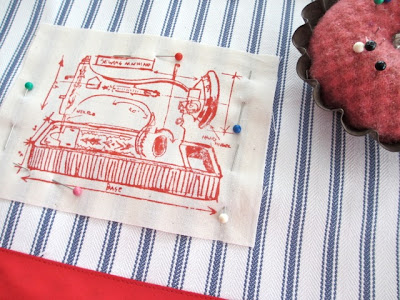 Then stitched it on with the same red thread. You could fold the edge under for a cleaner look or pink it with pinking shears, even sew it with a zig zag stitch.  Lots of options for sewing the patch on. 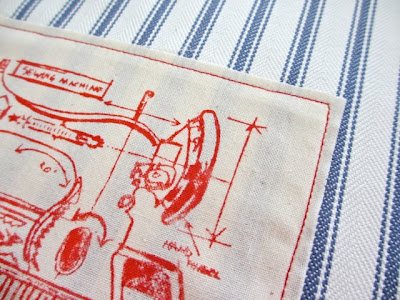 As I said before, I used the 7/8” Wide Single Fold Bias Tape so I would have an extra wide edge at the bottom.  My idea was to use the Simple Sayings stamp set to stamp on the bias tape.  I chose a few stamps from the Simple Saying set, the small pointing finger from Warehouse District, and a small star from an tiny letter set I have had for about 100 years.  I am also using Black Soot Distress Paint.  The mister is in the picture to remind everyone to clean your stamps right after using. 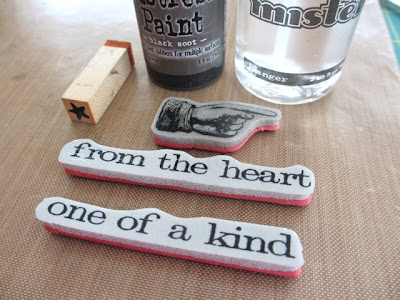 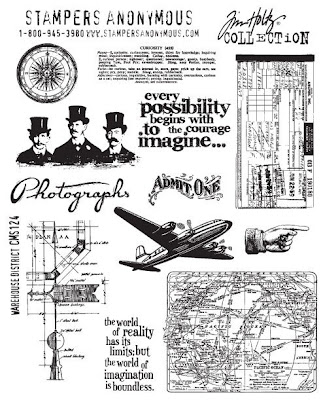 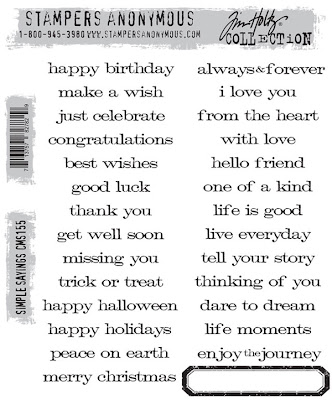 I stamped along the edge following the same pattern.  I figured these were good words to use as everything I sew is "one of a kind"...you can never make anything exactly the same, even if you try right?  And "from the heart" just seemed like a great sentiment to go along with it.

At first I was worried there was too much of a bump under the bias tape (from the raw edge inside) to get a good stamp image but I was wrong.  As I stamped each time, I slightly rocked the stamp just a bit to make sure it was going over the bump.  Not one mess up or bad image.  Super happy with that. 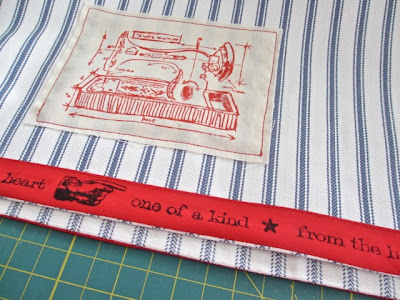 I added a Trinket Pin and a bit of black ribbon to the corner of the stamped image. 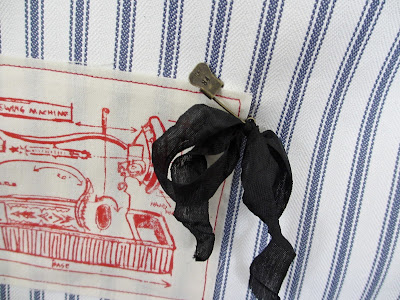 Here is the finished cover.   Super easy project.
In addition, if you don't need a cover for your sewing machine, you can use the same concept to create a tote bag by just turning it over and adding handles.  You would just need to adjust the size measurements to make the bag.  Maybe that is another tutorial.... 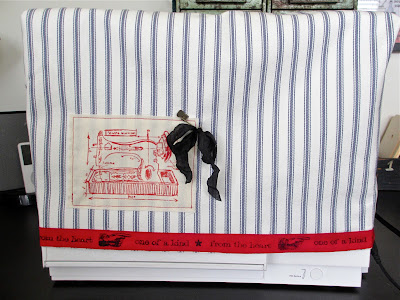 Cheers for a great week!
paula