I met up with Sande last Wednesday for some R and R (rest and relaxation) before the event Sande was teaching at on Friday.  Since the weather was so nice I took her to 3rd street Promenade in Santa Monica.  I had fun using Instagram to take some shots of the shops we saw. 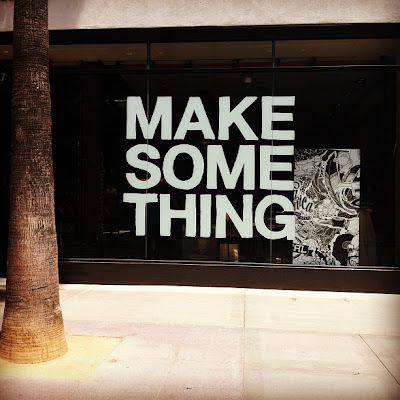 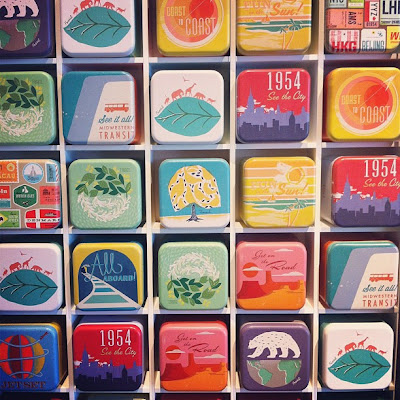 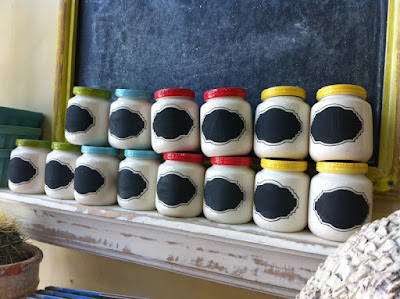 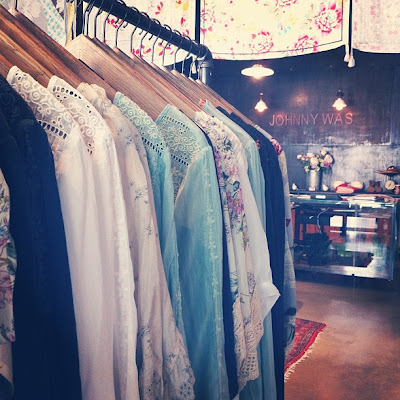 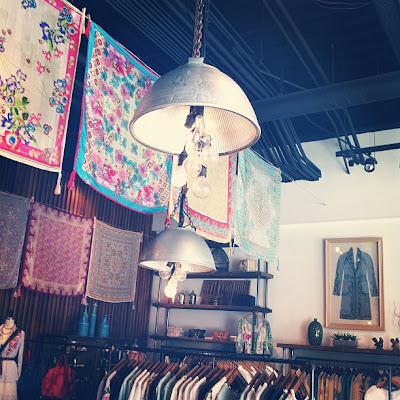 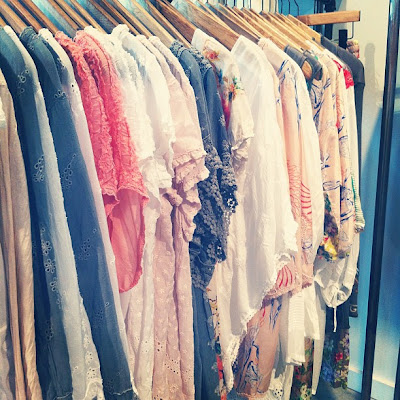 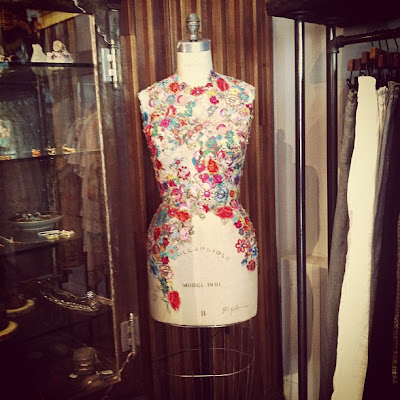 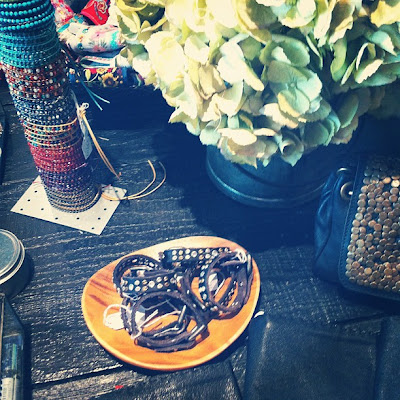 All Saints Spitafields
I have wanted to see this store...it did not disappoint.
Wish I could have got a better picture but the sunlight was in full force on the glass.  If you can't tell, the windows were covered with antique sewing machines.  466 to be exact (46 rows of ten + 3 over each doorway) with another 32 inside the store.  Each vintage machine was different...hand painted with beautiful markings.  Seriously jaw dropping. 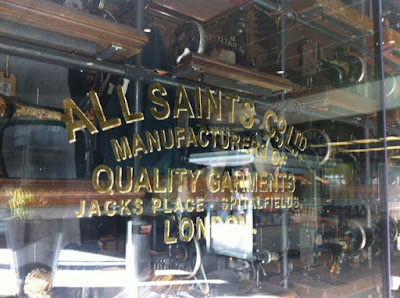 Much easier to get a shot from the inside of the store looking out to the mall area.  This in now way does it justice...it's one of those "gotta see it to believe it" displays. 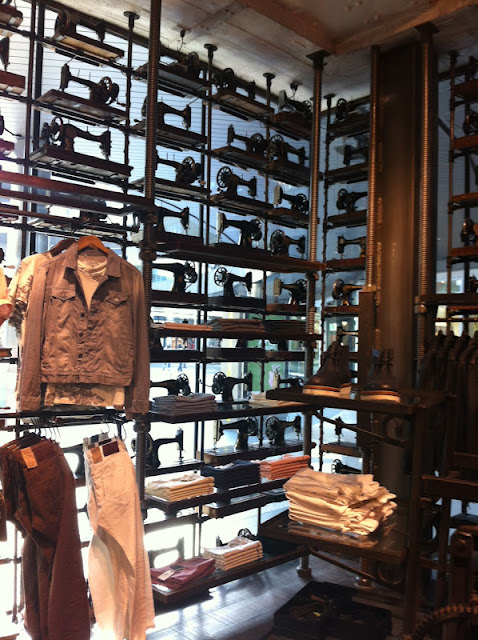 Los Angeles
On Thursday we were picked up at the hotel by our friend Lia B. for a little site seeing and shopping in LA.  Sande had never been down Sunset Blvd or Beverly Hills so off we went (and by the way the weather was perfect).
We were driving down by the LA County Museum when we happened upon two blocks of parked food trucks.  Someone just happened to be pulling out of the first parking space near the trucks and we pulled in (there was even time on the meter).  Truly a lucky day in LA. 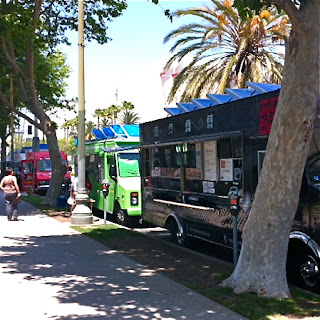 We went straight to the truck with the longest line, Cousins Main Lobster.
Apparently you have to follow them on Twitter to find out where they are going to be on any given day. 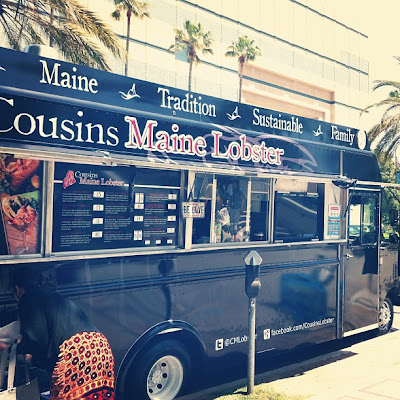 See the two guys in front of Sande?  In about a minute she is going to strike up a conversation with them because they each have frosty root beer and she wants to know where they got it. 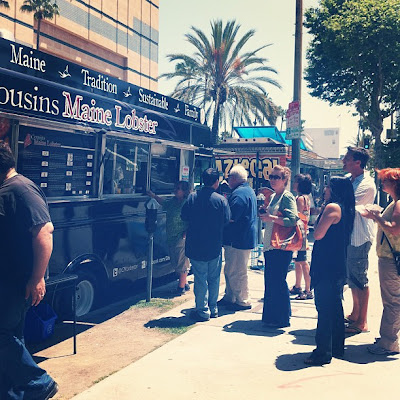 ...turns out they highly recommended the Cousins Maine Lobster truck (they were on their 2nd roll) and the root beer, also from Maine, they were drinking.  By the time she got to the front of the line the root beer was sold out but the three of us girls shared a couple lobster rolls (one warm, one cold) with Diet Coke instead.  They were right, the rolls were fabulous, piled high with lobster...we all decided it was the warm buttered and toasted bread (also from Maine) that took the roll over the top. 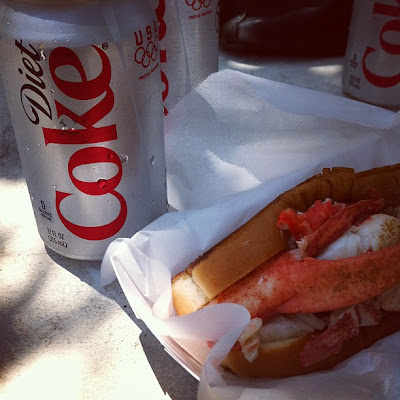 After we ate we could see the two guys across the grass area and we decided to see if they had any more suggestions.  That was a understatement.  We ended up talking to Allan (left) and Victor (right) about the food at the trucks, places to eat in LA, food they wouldn't waste their time on, and how far they would drive for good food even if it's served out of a food truck or tent on the side of the road.
Seriously, they could have their own comedy show...so funny.
They also bought some garlic with filet mignon noodles that we all got to sample from another food truck. 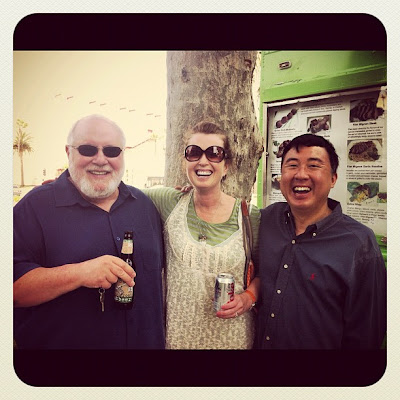 After at 30 minutes of talking we walked back to the Lobster truck so Sande could get a Woopie Pie.  Then here comes Allan and Victor with spring rolls...they looked good too but we passed on tasting.
we said our good byes (again) and went on our way...looking for yet another adventure.
Thanks Allan and Victor...they should give you guys your own show on the Food Network! 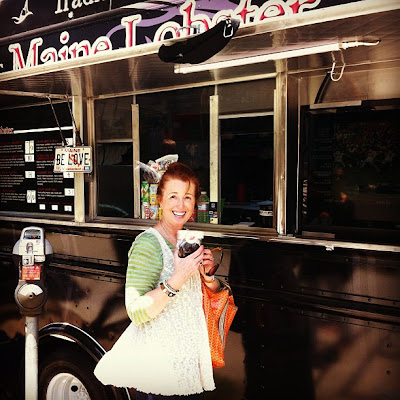 Now we headed down town to the Garment District to Levy's trimmings, my favorite little hole in the wall.  You always have to pack in some very dicey parking places in the garment district.  Today must have been our lucky day since we got the very last parking space, number 7. 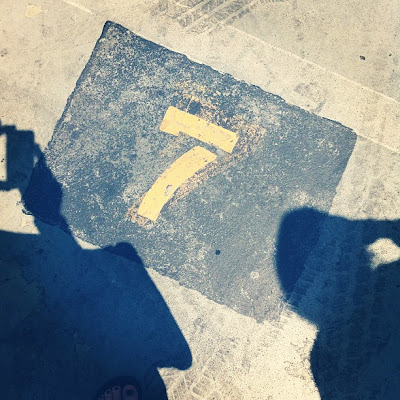 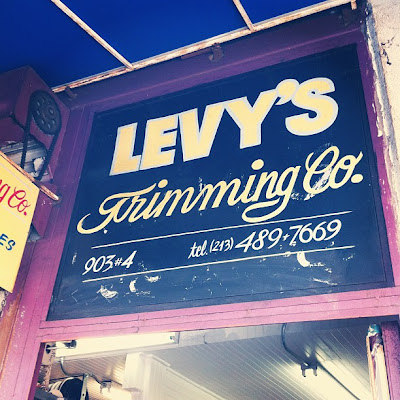 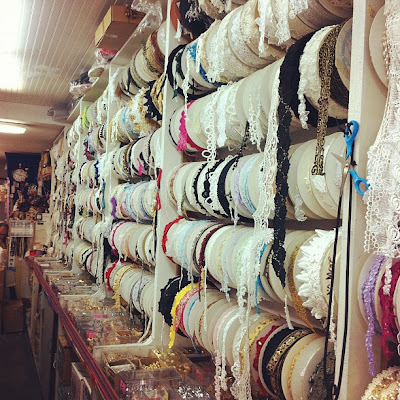 Maria was hilarious... this is her and Sande pretending to fight over the money.  She had us laughing the entire time we were there. 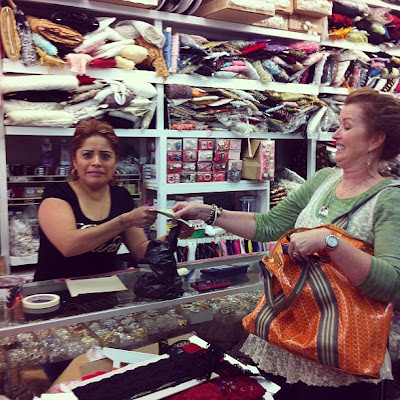 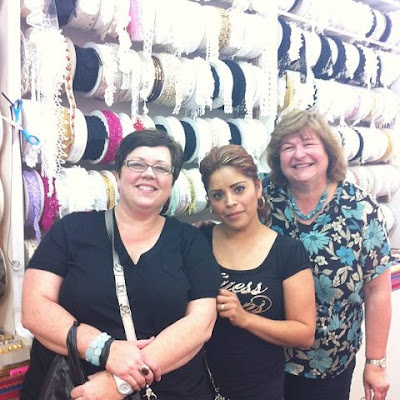 Well, that's about it for our trip to LA...or maybe I should say I ran out of pictures to share!

I will be back with pictures of the journal the students made in class.  Sande did a fabulous job teaching this giant journal (17 pages to be exact)...the ladies were so happy when we were done!  When they came to the make and take on Friday night to put their books together they were even happier because the books were so big and fat. It was quite an accomplishment to finish the book.

Now I'm back to working toward some deadlines for the Australia classes that have to be met...busy, busy, busy.
Wish me luck,
cheers
paula