Sorry about being AWOL this week but Deb and I have been in LA at the warehouse setting the booth for the CHA trade show in ONLY 2 weeks!  This is such an exciting, chaotic, crazy time of year! So much behind the scenes work to do to make the show happen.
Funny, one of the definitions of the word scene is:
scene |sēn|
noun
• a place, with the people, objects, and events in it, regarded as having a particular character or making a particular impression.

That's what we do.  We set the stage or "scene" that hopefully leads retailers to see our vision, believe in our brand, and ultimately buy our product. 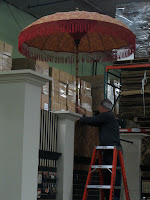 If you have ever seen the 7gypsies booth you know there is much to be accomplished before the show.  It all starts coming together when the walls of the booth are set up by Jorge and Hector our FABULOUS support team.  We tell Jorge what we need built, welded, or painted and he gets it done.  Like this week when we told him we wanted a giant, and I do mean giant, umbrella to stand 8 feet above the booth.  Within 5 minutes he figured out how to do it and the next morning he had the contraption made and nailed to the booth (if only he could come to my house!) He is truly our own booth engineer!
Jorge and Hector built the booth from the ground up from Steve Smylie's drawing so that it can be put together in many configurations depending on need.  Pure engineering genius right there.
Then Deb, Janelle Smith and I picked the wallpaper over a conference call (since we each live in a different state) and used email to send pictures of wallpaper that Janelle had ordered, cut into swatches and glazed (that was a long call).  All in all I think there are 5 different wallpapers as well as burlap walls that we dyed with coffee grounds we got from Starbucks (I could write a whole blog post just on the burlap walls with the nailed on patches).

A true labor of love. 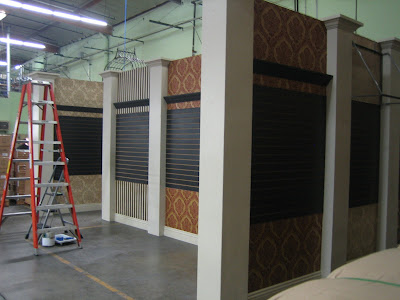 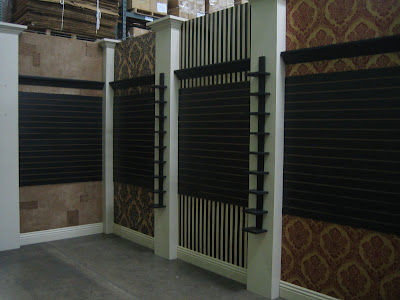 Next week Deb is going to tell you what she does to get ready for the booth.  It may not be a sewing tutorial but I think you will find it interesting to learn about some of the steps it takes to get ready for the show.  We also have some portfolios to show you that tie in with whats happening on the 7g blog right now.  I'll get those posted in the day or so.  Just let me unpack and do my laundry before it takes over the house.

Talk to you soon

Email ThisBlogThis!Share to TwitterShare to FacebookShare to Pinterest
Labels: CHA