Paris is always a good idea...

We have returned from our trip to Paris over Easter break.  Thought I might share a few pictures with you today. 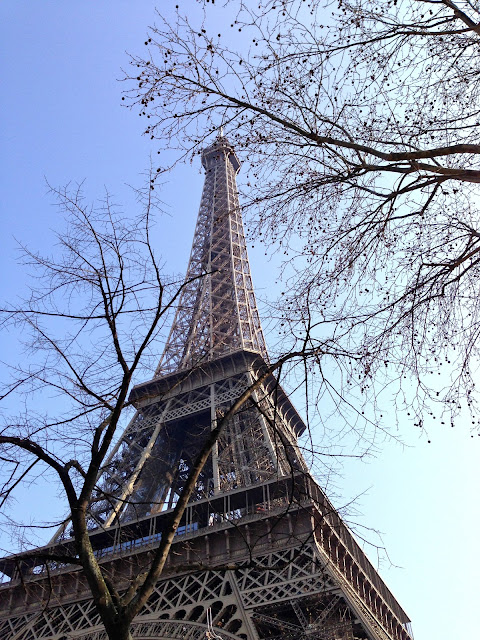 I was asked to teach at Version Scrap last year so I have know for long time that I would be going to Paris.  Around Christmas time I got this photo in a text message from my 11 year old niece, Maddie.  I knew at that minute that I wanted to take her to Paris with us.  I mean really, who could resist paper diorama of Paris? 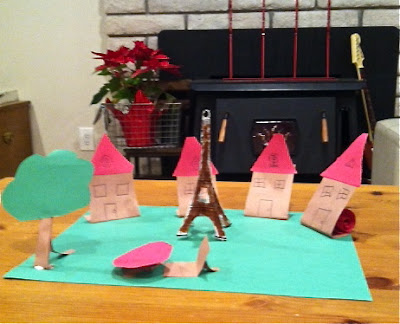 So we rented a nice apt close to the Eiffel Tower.  I figured if we were taking her to Paris I wanted her to be able to walk by the Eiffel Tower every day.  Which we did.

Finally the day arrived to leave...and then we got stuck in Philly due to mechanical difficulties.  After re-booking ourselves through Switzerland we finally made it to Paris a day and a half late.  Boo, on USAirways for stranding 300 passengers in the Philly airport with just a piece of paper with a phone number on it to re-book!  That was more than stressful!
By the time we finally arrived, we were more than ready!

This photo was taken on our first outing, walking up Champs de Mars to the tower. 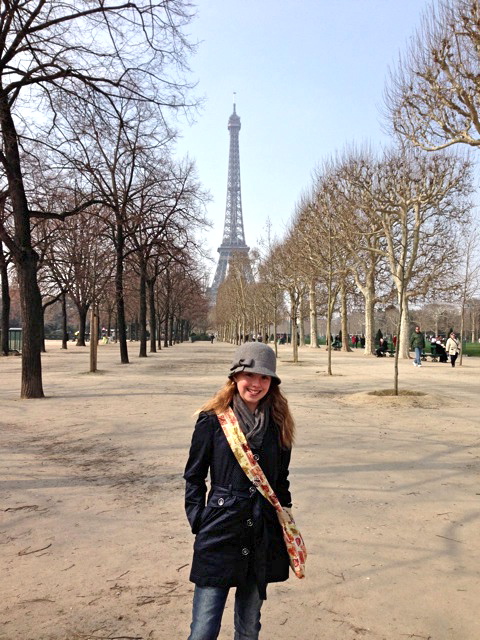 We were lucky enough to meet up with my good friend, Sande Krieger who was in Paris at the same time (her husband was running the Paris Marathon).  We spent the day at a flea market, walking a neighborhood by the Rue Cler looking for a great Art Nouveau door we saw online, 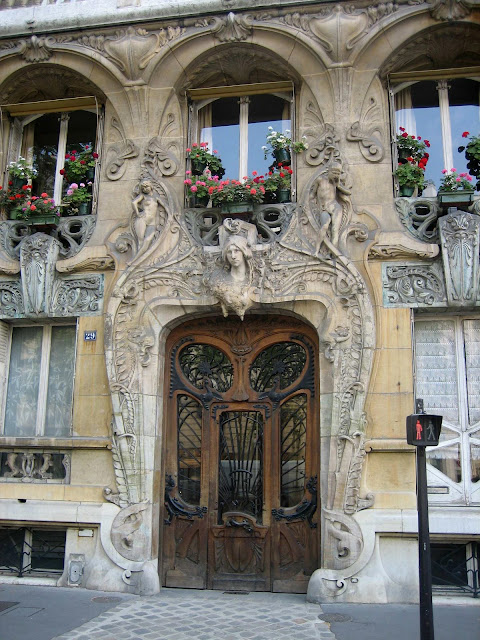 a bit of time in the Marais to visit at St Paul's church (built in the mid 1600's) and shoe shopping.

Maddie tried ditching her Converse for these wedges but I said there were not approved for 11 year old's.  The lady at the shop was very nice and let her try them on anyway.  Oh, and I think they were 200 Euros...but very cute. 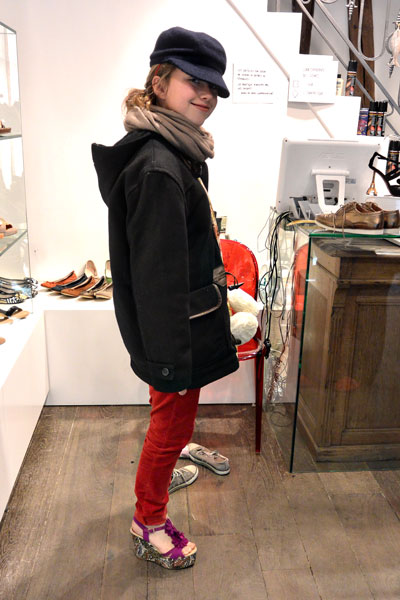 Then ended the night by having dinner in a great little cafe by our apartment. 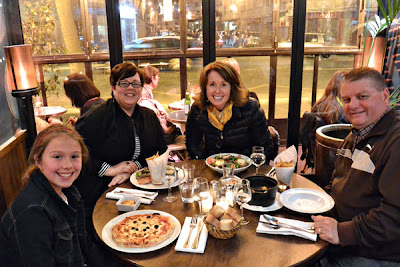 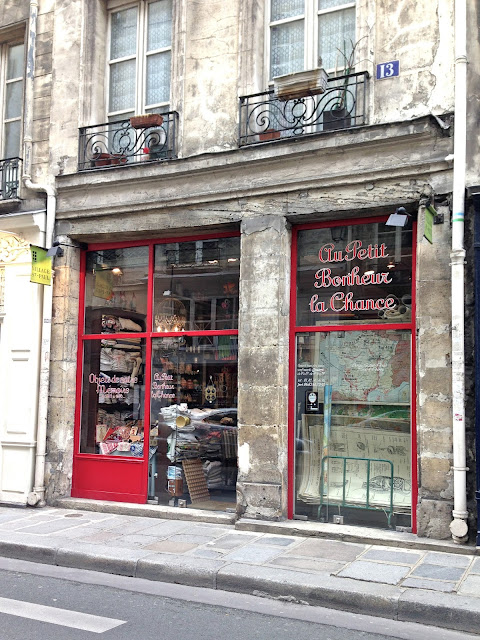 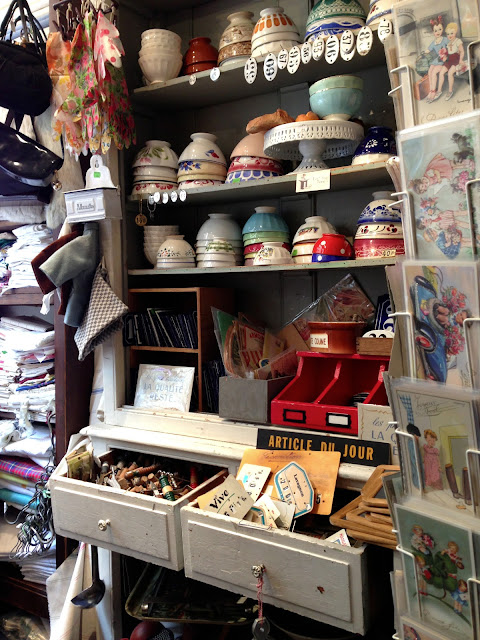 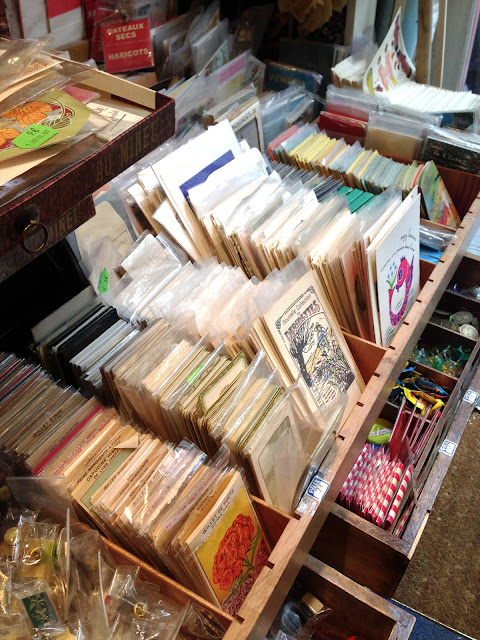 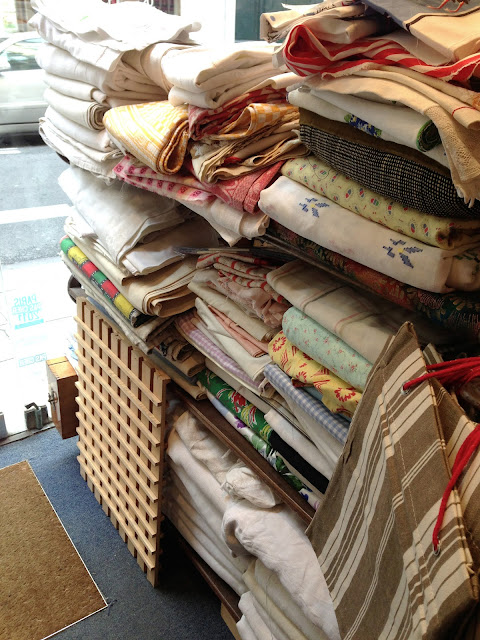 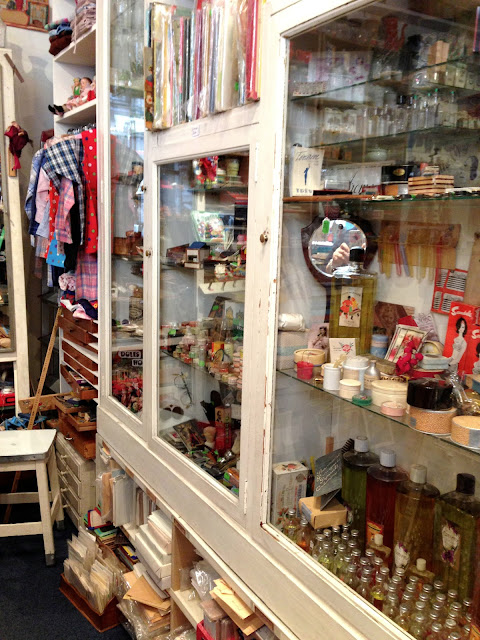 Favorite monument we visited? the Opera Garnier (finished in 1875, 14 years after it was started)
with it's huge 7-ton chandelier... 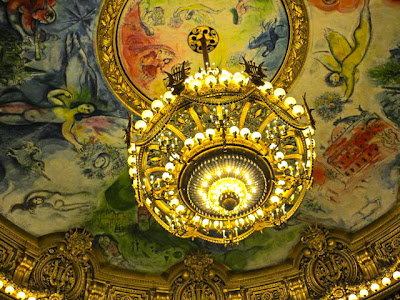 and the 1964 Chagall ceiling (it is suspended below the original).  Some people love it, some hate it.  I am not a fan of Chagall myself, but I did think it was pretty with all the bright colors...it just doesn't go with the rest of the architecture of the building.  I'll leave it up to you for your own judgement. 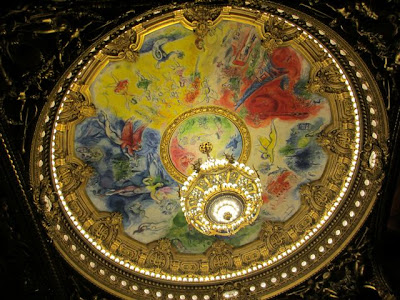 can you see the Eiffel Tower? 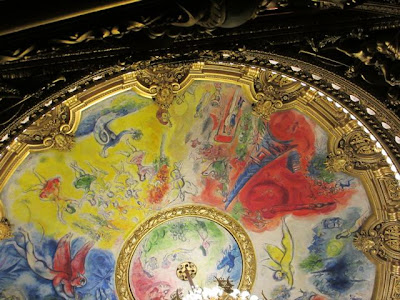 Plush red velvet seating.  If you take a tour of the Opera you are able to go into the auditorium if there are no rehearsals going on.  They were only doing stage work the day we went, so were were able to go in and sit in the seats. 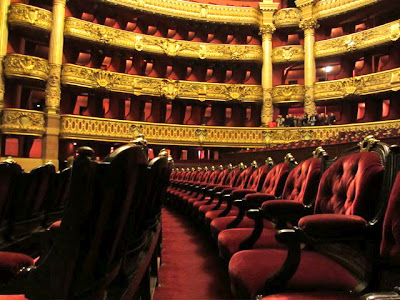 There are two alcoves on either end of the grand foyer that we loved for the metallic paint.
This is the moon room (with the bats and owls). 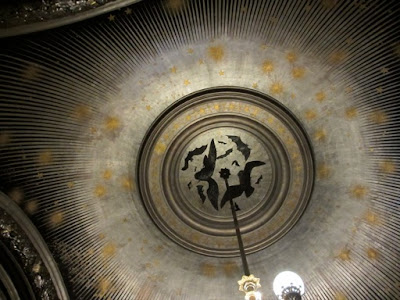 And this is the sun room with the salamanders. 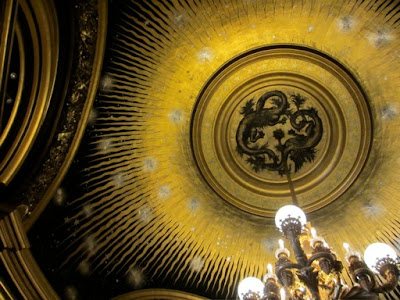 This is the grand foyer.
Amazing as the chandeliers were all of 8 or 9' off the ground. 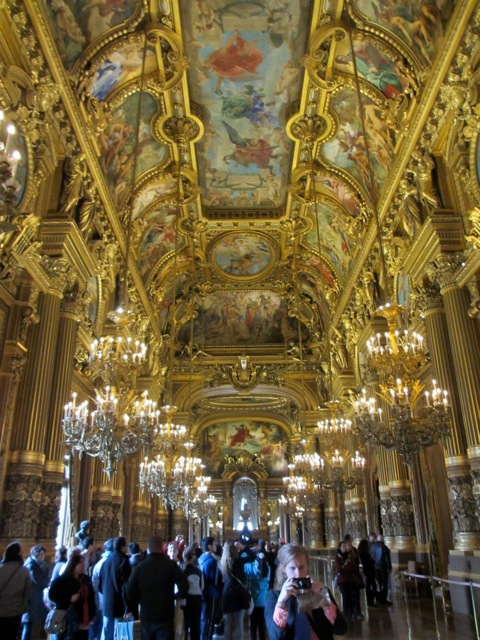 We also visited the Louvre a couple times.  I think the best picture we took is this one of all the people trying to take a picture of the Mona Lisa, that is behind the rail on the right.  Downright crazy. 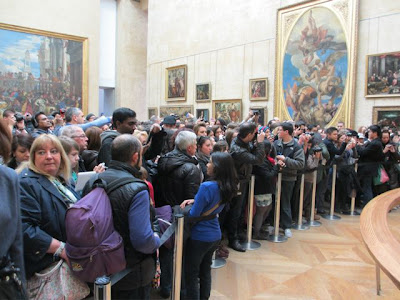 This was Maddie's favorite painting...the enormous "Coronation of Napoleon" by Jacques-Louis David where Napoleon is depicted crowing Josephine.  We went back to see it again because we liked it so much. 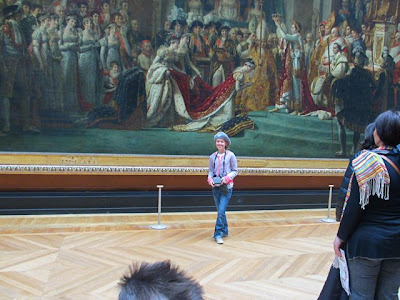 I'll finish up with one of my favorite pictures of Maddie eating a Nutella crepe on the Rue Cler one of my favorite little streets in Paris.  We went there 3 times in one week she loved them so much.  And yes, it was that cold that we had to buy her a wool coat at Gap kids and some ear muffs.  Sometime, we will have to go back in the springtime where we don't have to bundle up so much! 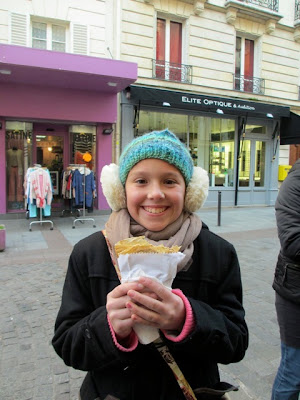 So, enough about Paris itself.  The last part of the trip I was able to teach at Version Scrap event on the outskirts of Paris.  There were many teachers, but just 3 Americans: Debby Schuh, Sharon Laakkonen, and myself.  I was able to teach 3 classes using Distress Stain, Distress Markers and lots of idea-ology trinkets.  My students were more than kind and very grateful.  Really, I could not have asked for a better group of ladies to work with over the course of the three days.


My best little helper
She worked two 10 hour days helping me set up, clean up, and pass things out.  Love this girl. 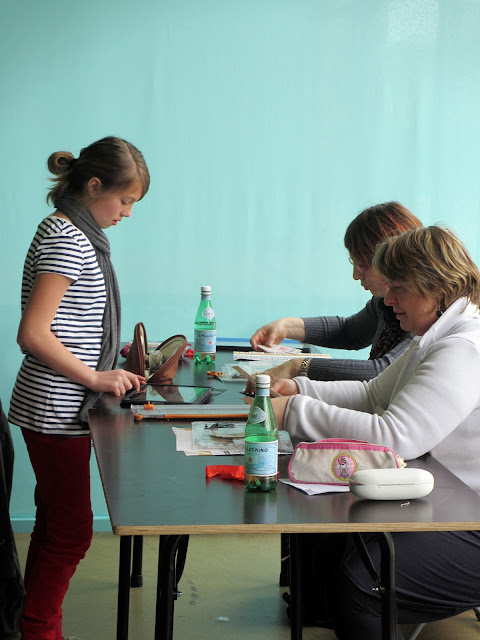 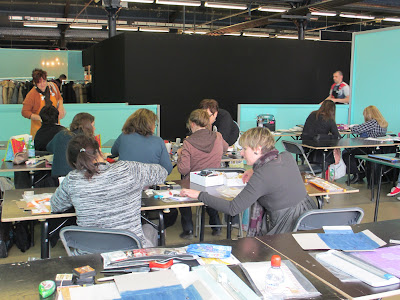 This picture was taken through the glass windows that covered the back wall of the classroom.  Perfect light for the technique table! 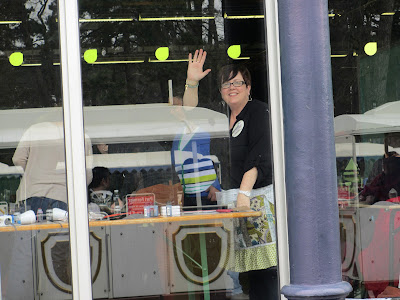 Sandrine (on the right), the BEST interpreter a girl could hope for.  She was amazing, not only interpreting but helping in class.  I felt so very lucky that she was assigned to my classes.
Sandrine's sister, Estelle on the left was the scrapper of the two (Sandrine is a scientist) and help Sandrine learn some of the lingo she might need to know for the class.  A HUGE thank you to both of you! 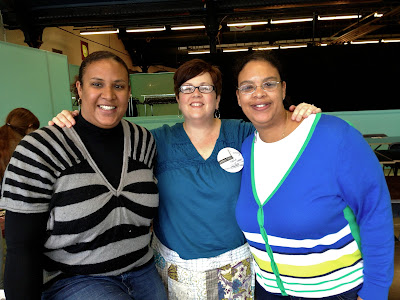 Here is our little American group, Sharon Laakkonen and her husband Bill.  Debby Schuh and her husband Dave.  We had a lot of fun at dinner and it was nice to relax after the 10 hour work day.  I also learned to spell Sharon's last name on this trip which I think is quite an achievement! 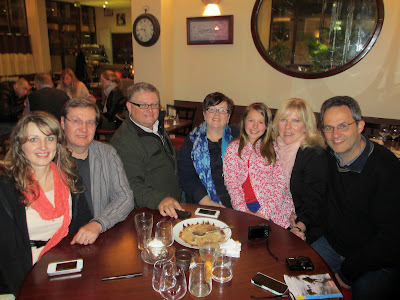 Well that is all for Paris.  Even after a few mishaps with the airline, it was a great trip.  We enjoyed ourselves and are looking forward to going back again.

I will be back soon with the last segment, "inserts" of the mini book I have been working on all month.
See you then and cheers for a great week!
paula
Posted by Paula Cheney at 12:45 PM